Section 66A of the Information Technology Act (“IT Act”), 2000, was enacted into the statute through an amendment in 2008. The section penalised sending "offensive messages" via online communication. Owing to excessive vagueness in the laws, the provision was often abused by enforcement authorities and ran the risk of a chilling effect on speech over the internet. In 2015, the section was deemed unconstitutional by the Hon’ble Supreme Court of India in Shreya Singhal v Union of India. However, despite repeated directions by the Supreme Court, the most recent in 2019, the provision continues to be invoked across the country. In an earlier article we highlighted continued prosecutions under Section 66A, as recently as March 2020. In this post we trace the journey of Section 66A of the IT Act from 2008 to 2020. 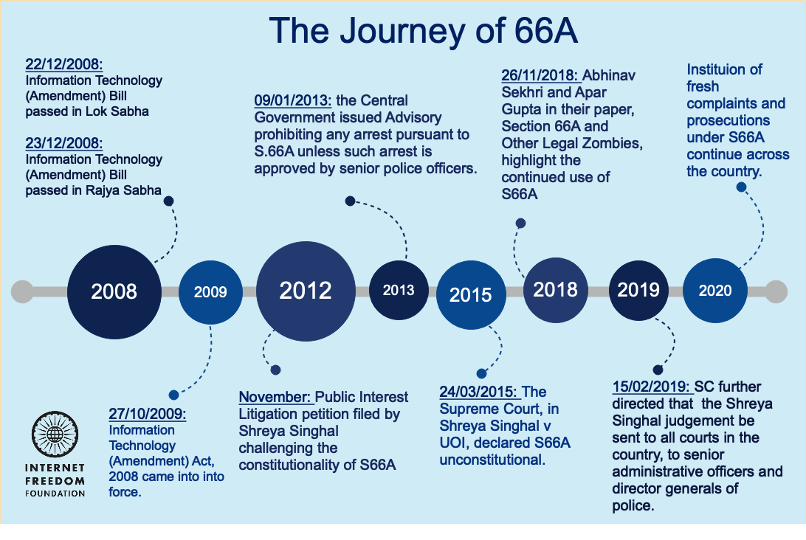 The Information Technology Act, 2000 (‘IT Act’) was enacted to provide a legal framework for the promotion of e-commerce and e-transactions in the country. In 2005, an expert committee was set up to review the IT Act to address the need for regulating cyber forensics and cyber crime, facilitating and promoting the growth of electronic governance and commerce, and complying with international security practices and procedures. The committee submitted its report with recommendations on a range of issues including computer related crime and electronic evidence.

It was through this process that Section 66A was integrated into the IT Act. The provision was aimed to deal with cyber crimes against women, especially to punish those sending ‘vulgar mobile phone SMSes to women’. The Bill was then referred to the Standing Committee On Information Technology, which was headed by Shri Nikhil Kumar on 19th December 2006. In a unanimous report on the proposed amendments, the standing committee, while suggesting many changes to the proposed bill, did not express any concern over the possible misuse of S. 66A.

On December 22, 2008, the Lok Sabha passed eight bills, sans debate. One of those was the 2006 Amendment Bill passed as the IT Amendment Act, 2008 (‘Amendment Act’) which amended the IT Act, formally introducing Section 66A which penalised sending "offensive messages" . The Amendment Act was passed in the Rajya Sabha on the next day.

In the session that began immediately after the Mumbai attacks on November 26, 2008, the Parliament prioritised legislations which were linked by an apparent aim to investigate and prosecute offences affecting the security of India. These were the National Investigation Agency Act, Unlawful Activities Prevention (Amendement) Act and the Information Technology (Amendment) Act. The Information Technology (Amendment) Act, 2008 when passed was primarily projected as an anti-terrorism  amendment  to  thwart  future  terrorist  attacks  such  as  the  November  26, 2008  terror  attacks  in  Mumbai.  The Amendment Act was passed, with an emphasis on terrorism and cyber crime, to allow authorities to intercept messages from mobile phones, computers and other communication devices, and block websites in the interest of national security.

Further, on both days, the functioning of the two houses was severely disrupted by Opposition members raising a ruckus over comments made by the then minority affairs minister A.R. Antulay questioning the circumstances of the death of a police officer in the 2008 Mumbai Terror attacks. In consequence, the Amendment Act was discussed for only 21 minutes in the Lok Sabha and passed without debate in the Rajya Sabha.

The Amendment Act came into force with effect from October 27, 2009.

The said amendment was criticised severely on grounds of :

Since the insertion of Section 66A, wide powers of the section were frequently used to stifle political dissent. One, particularly infamous, incident was the arrest of two girls in Mumbai over a Facebook post criticising the bandh in Maharashtra on the death of the Shiv Sena Chief,  Bal Thackerey, in November 2012. One of them had posted the allegedly illegal content, while another simply ‘liked’ it. Within hours of the post and subsequent ‘like’, the two were arrested and charged under S.295A of  the Indian Penal Code and S. 66A of the IT Act. Although the girls were released later and the criminal charges against them were dropped, it evoked severe criticism all over the country. The general sentiment was that the police had misused its power by invoking S. 66A as a weapon to stifle political dissent, as opposed to regulating harmful content.

Shocked by the blatant misuse of the law, a Public Interest Litigation (‘PIL’) petition was filed, in November 2012, seeking to declare S. 66A of the IT Act, 2000 as unconstitutional. This commenced the process of one of India’s and even the world’s most significant internet law judgements in modern history.

During the pendency of the case, a question was posed in July 2014, before the Rajya Sabha inquiring if the Government considered amending Section 66A due to concerns of misuse . The Minister of Communications and Information Technology, Mr. Ravi Shankar Prasad,  answered that the provisions were considered to be in line with the fundamental constitutional provisions. He stated that detailed discussions were held by Cyber Regulation Advisory Committee (‘CRAC’) with stakeholders including industry associations, intermediaries, civil society actors and users on the effect of Section 66A. These discussions purportedly found that the law itself was appropriate, but steps were needed to minimise the likelihood of abuse or misuse.

Accordingly, the Central Government issued an Advisory dated 9th January 2013 prohibiting any arrest pursuant to Section 66A unless such arrest was approved by senior police officers. The Supreme Court , in the PIL challenging the validity of S.66A,  directed all the States / Union Territories to ensure compliance to the Advisory before effecting arrest under S. 66A of IT Act.

On March 24, 2015 the Hon’ble Supreme Court of India passed a landmark judgement in the matter of Shreya Singhal v Union of India. The Hon’ble Supreme Court relied on international human rights and Indian constitutional benchmarks to hold that Section 66A of the IT Act arbitrarily and disproportionately affected the right to free speech.

The Court agreed with the the petitioner’s contention that S. 66A is capable of limiting all forms of internet communications as it makes no distinction “between mere discussion or advocacy of a particular point of view, which may be annoying or inconvenient or grossly offensive to some and incitement by which such words lead to an imminent causal connection with public disorder, security of State etc.” [para. 20] The Court found that S.66A was vague and could be arbitrarily interpreted to penalise even innocent speech. The effect of this decision would be that all pending cases would be dismissed and no fresh cases would be instituted under S. 66A.

The 66A Zombies rise

In light of the provision being declared unconstitutional, the story should have had a neat  conclusion wherein people are no longer prosecuted or punished under an unconstitutional law. However, a 2018 study by Gupta and Sekhri highlighted the continued use of Section 66A, including fresh cases registered in police stations, investigated and, considered by lower Courts, even after the Shreya Singhal decision. The authors described the continued use of the provision as a “Legal Zombie”. They acknowledged that the study was based on limited data. The study postulates that

For example, as noted by Gupta and Sekhri, the High Court Rules published by the High Court of Delhi failed to incorporate any provision for communicating decisions from the Supreme Court to the lower courts.

Under Articles 227 and 235 of the Constitution of India, High Courts are granted supervisory jurisdiction and administrative powers to maintain the efficient, smooth and orderly functioning of District Court and Tribunals, within its jurisdiction. These powers include

These powers granted by Articles 227 and 235, entrust the High Courts with the duty to ensure effective communication of Supreme Court decisions to the subordinate courts within its jurisdiction, and also ensure compliance with such orders.

The battle against the 66A Zombies begins

In January, 2019, People's Union for Civil Liberties (‘PUCL’), one of the original petitioners in the Shreya Singhal Case, approached the Supreme Court highlighting the study and applying for directions to ensure implementation of the Court's original decision.

In a counter-affidavit, the Union of India detailed steps it had taken to generate awareness on Section 66A. This included a letter the Government wrote on 11th January, 2019 and then a reminder on 14th January, 2019 to various state governments asking them to furnish data on Section 66A cases and also asking them to close them. Some states responded.

For instance, Kerala stated that there were 19 cases that were filed after S. 66A was held to be unconstitutional and they would be closing all of them. The Court by judgement dated February 15, 2019, not only directed that all pending cases under S. 66A be closed but also that no fresh charges may be registered. The SC further directed that  the Shreya Singhal judgement be sent to all courts in the country, to senior administrative officers and director generals of police.

The battle against the 66A Zombies continues

Despite this, fresh complaints continue to be filed, as recently as April 2020. In January 2020, the Karnataka High Court imposed a cost of Rs 10,000 each on two police officers for registering an FIR under Section 66 A of the Information Technology Act. In February 2020, a guest lecturer at a college in Assam, was charged, arrested and later sent to judicial custody for posting derogatory remarks against the BJP, the RSS, Prime Minister Narendra Modi and ‘Sanatan dharma’.

InMarch 2020, the Patna High Court granted bail to two petitioners who had been in custody for 6 months. These instances highlight the continued invocation of S. 66A, 5 years after it was declared unconstitutional, despite further directions by the Supreme Court in 2019. This points to a systematic failure by the judiciary and law enforcement system.

We are committed to erasing S. 66A from every FIR and criminal case all across India, irrespective of the person who is being prosecuted. This blogpost on the journey of S. 66A highlights the importance and challenges of monitoring and ensuring compliance with the final decisions of the Supreme Court.

To meet this challenge we, in collaboration with CivicDataLab (‘CDL’) with the support of Tech4Dev, have come up with a tool to track cases under S.66A through strong data collection, analysis, and visualization tools. We will be working in partnership with CDL to build a tool to track cases under S. 66A at the district level between 1st January 2008 till 15th February 2020. We intend to analyse the data to identify and highlight the gaps in the system, put forth recommendations and advocate for a stronger, more accountable and transparent system.

This post has been authored by Sonalakshi Naidu, a legal intern at IFF, and reviewed by IFF staffer, Anushka Jain

Help us in our mission to track and hunt these legal zombies , donate and become a member today!